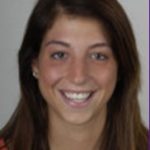 Career Highlights: Finished her career fourth on the school’s all-time list with 187 goals and sixth with 208 points … Scored 13 goals in four NCAA games in 2007, tying her for second on the all-time list with 37 career goals in NCAA Championship play … A two-time all-conference selection and 2006 Third-Team All-American … Helped the Wildcats to three-straight NCAA titles, a remarkable 77-5 record during her four years (13-1 in NCAA Championship play) and a 62-2 mark over the last three.

2007: Started all 22 games, helping the Wildcats set NCAA single-season records with 361 goals, 168 assists, 529 points and a 16.4 goals per game average … Second-team All-ALC selection … Finished fourth overall on the team with 52 goals — one of five players with 50 or more goals … Totaled 22 ground balls, 18 draw controls and 11 caused turnovers … Scored at least one goal in all but one game and had 15 multiple-goal games … After a slow start to the season, she busted out with four goals in the win over No. 15 Penn (3/9) … Came up big later in the season, scoring a season-high six goals in the national showdown with No. 4 Duke … Scored five goals in the NCAA semifinal win over Penn (5/25) … Also had four-goal games against California (4/9) and Ohio State (4/27) … Finished the year strong, scoring 13 goals in four NCAA Championship games, three against Holy Cross (5/13) and Syracuse (5/19) and five and two against Penn and Virginia, respectively, in the finals … Named to the NCAA All-Tournament team for the second-straight year … Led the team with 133 shots … Scooped up three ground balls in back-to-back games against Johns Hopkins (4/20) and Rutgers (4/23) … Academic All-Big Ten … IWLCA Academic Honor Roll.

2006: Played in all 21 games with 20 starts … Second on the team with 55 goals, good for seventh on Northwestern’s all-time single-season list … The only Wildcat to score at least one goal in all 21 games … Recorded 19 multiple-goal games, best on the team … One of only three Wildcats to score at least one point in every game … Also had eight assists for 63 points, third best on the team … Took 107 shots, second on the team … Fourth on the team with 43 ground balls … Finished 42nd nationally with 2.62 goals per game … IWLCA and Insidelacrosse.com Third Team All-America selection … IWLCA First Team Midwest/West All-Region choice … ALC Second Team selection … Helped the NU offense lead the nation in scoring with 15.8 goals per game … Named the NCAA Championship Game MVP after scoring four of NU’s seven goals in the win … NCAA Championship All-Tournament Team selection after scoring a total of six goals in the two wins over top-seeded Duke and Dartmouth … Scored a total of 12 goals in the four NCAA Tournament games … ALC Player of the Week and womenslacrosse.com Honor Roll selection after scoring a season-high six goals in the win over No. 14 Notre Dame (3/19) … Had four goals in the win at Hofstra (2/24) … Tallied eight points (6g, 2a) in wins at Syracuse (3/31) and UConn (4/2) … Came up big in two wins over No. 5 UNC (4/21) and No. 8 Johns Hopkins (4/23) with six goals and one assist over the weekend … Scored three goals in the win over Denver (4/30) … Academic All-Big Ten.