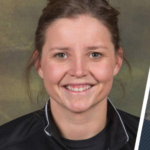 A native of Peterborough, Ontario, Daley becomes the third head coach in program history. She replaces Scott Teeter, who accepted the head coaching position at Louisville on Nov. 20.

“We are thrilled to have Allison Daley return to Canisius to lead our women’s lacrosse program,” Maher said. “As a former Golden Griffin student-athlete, Allison understands and appreciates the hard work and tradition our women’s lacrosse program prides itself on. She helped develop our culture as an All-MAAC goalie and she continued to help build our foundation as an assistant coach in our program. I believe we have hired a fantastic young coach and we look forward to continuing our program’s success, both regionally and within the MAAC.”

“I am honored and humbled to return to Canisius and take over a program that has given me so much,” Daley said. “I would like to thank Director of Athletics Bill Maher, Associate Athletic Director/SWA Traci Murphy, Assistant Athletic Director Bill Morris and Vice President for Student Affairs Dr. Terri Mangione for this amazing opportunity. I would also like to thank Binghamton’s Director of Athletics Pat Elliott and head women’s lacrosse coach Stephanie Allen for their support and mentorship through this process and my time at the university.”

Daley returns to Main Street after serving as an assistant coach at Binghamton University from 2013-16. She spent the 2017 season working with Delaware, before returning to Binghamton in the offseason.

At Binghamton, Daley mentored 11 all-conference honorees and also had a major role in leading the Bearcats to the program’s lowest goals against average in 2016. Additionally, Binghamton midfielder Rebecca Golderman, one of Daley’s recruits, became the program’s first-ever America East Rookie of the Year.

In her stint at Delaware, the former Canisius goaltender coached the Blue Hens to nine victories and a berth in the 2017 CAA semifinals. Delaware finished the 2017 season ranked seventh nationally in goals against average.

Prior to joining the coaching staff at Binghamton, Daley was Canisius’ assistant coach and recruiting coordinator under Teeter.

She helped build a Griffs program that won back-to-back MAAC titles and advanced to the NCAA tournament in each of her two seasons. Daley recruited and coached the 2012 MAAC Defensive Player of the Year and coached seven all-conference honorees.

As a player Daley, was an elite goaltender and team captain who enjoyed a decorated playing career. She was a member of Canada’s U19 National Team before embarking on a successful four-year undergraduate career on Main Street.
She was the MAAC Defensive Player of the Year in 2010 and earned MAAC Tournament MVP honors after leading the Griffs to their first conference title in 2011.

Daley was a three-time All-MAAC selection and became the program’s first IWLCA all-region pick following her senior season with the program. The Blue and Gold alumna twice earned all-tournament team honors, and graduated holding school records for career saves (662) and goals against average (11.66).

Daley received her bachelor’s degree in psychology from Canisius in 2011 and went on to receive her master’s degree in sport administration in 2013.