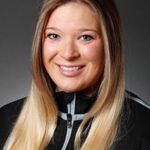 Kaylin Morissette, one of the most decorated players in Louisville lacrosse history, is in her first season as an assistant coach for the University of Louisville women’s lacrosse team and her second overall with the program.

In her first season, she served as student assistant and helped the Cardinals win five of their first six games before finishing the season with a 6-11 record. She helped guide freshman Caroline Blalock and senior Emily Howell to All-ACC honors.

Prior to coming to Louisville with head coach Scott Teeter, she served as an assistant on Teeter’s staff at Canisius in 2017. She helped guide the Griffs to a MAAC Championship, while mentoring eight All-MAAC players, including Erica Evans, who was named MAAC Midfielder of the Year after breaking the MAAC record for points scored in a season.

Morissette graduated from the University of Louisville in 2016, following a storied lacrosse career. She ranks first all-time with 572 draw controls, which nearly doubles Emily Dashiell’s second-most 247 career draw controls. She ranks second in school history with 51 assists, 73 games played and 72 starts, third with 218 points and 119 ground balls and fourth with 167 goals.

In her four years, she helped lead the Cardinals to a 49-24 record, including a Big East Championship and the program’s first ever NCAA Tournament win in 2014. In 2015 and 2016, she was named IWLCA First Team All-American. She is one of two Louisville players to be named IWLCA All-American, joining Nikki Boltja in 2014, and the only player to earn the honor twice.

A native of Bowmanville, Ontario, Canada, she also competed for Team Canada at the World Cup in 2013 and 2017, helping Team Canada to a silver medal in 2013 in Oshawa, Ontario.