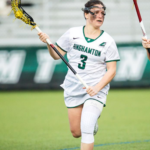 A native of Watertown, N.Y., Arthur will assist in the development and coordination of the team’s offense and transition game. She will also oversee individual skill development and assist in recruiting efforts, game scouting and academic success.

“I am really excited to have Brianne join our coaching staff,” Daley said. “She will bring a lot of passion, energy and enthusiasm to our program. Bri will fit in well with our coaching staff, our philosophies and beliefs and will be a terrific role model for our student-athletes. Bri was a special player to coach and I am looking forward to welcoming her to the Blue and Gold and working alongside her”

Arthur joins Canisius after a standout career with the Bearcats that saw her tally 104 goals as she became just the fourth player in program history to reach the 100-goal plateau during her career.

A two-time team captain, Arthur earned All-America East Second Team accolades as a senior, recording a school-record 45 goals during the 2018 campaign. She was selected to participate in the IWLCA Senior All-Star Game in June.

Arthur has worked as a youth lacrosse coach in her hometown for the past five seasons, working with a variety of age groups during the summer. She was also active in the Binghamton community as a member of the women’s lacrosse team’s leadership program, helping organize various community service experiences throughout the year.

“I am so excited to join the Canisius women’s lacrosse coaching staff,” Arthur said. “I have learned a lot in my five years as a student-athlete and I cannot wait to bring that knowledge to a different program. It is an amazing opportunity that I am able to stay involved in the game of lacrosse in an entirely different way than before.”